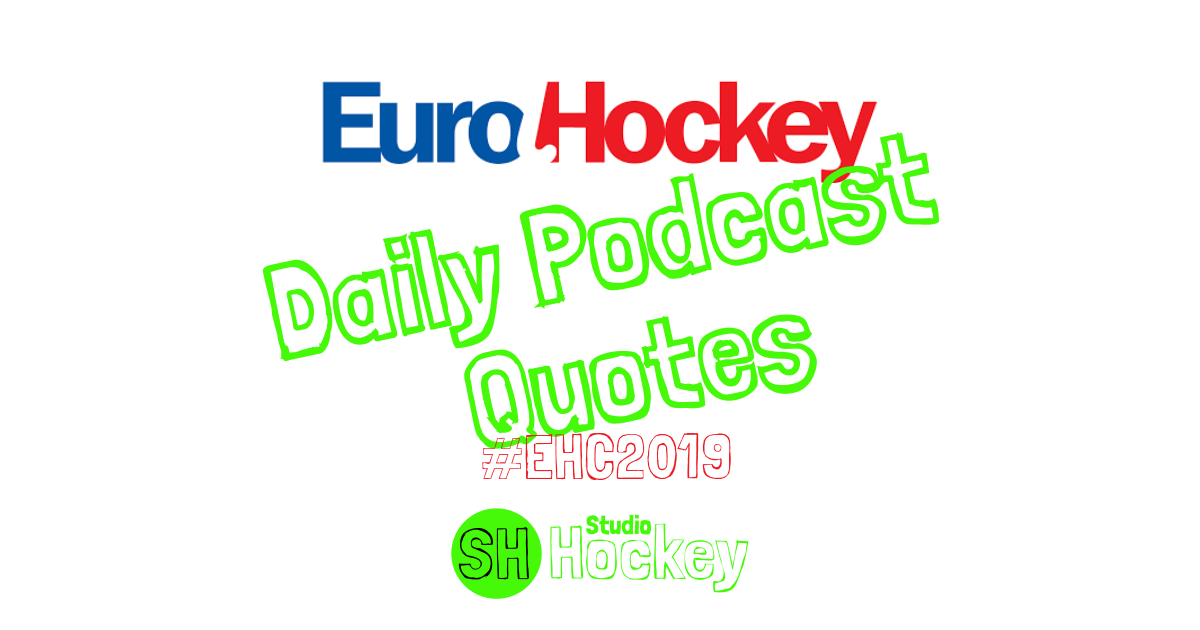 The European Championships played in Antwerp made it possible for me to talk to several interesting hockey people face to face for our podcast. So we made a mini series of 12 short (15-30 minutes) daily podcasts we called the EHCdaily. Below you’ll find some quotes from these that stuck with me, plus the link to the full podcast with each of these quotes… Abigail Raye had an unusual pathway to her start with the Belgian women in this European Championship. Born in England she moved to Canada as a teenager. Played +150 caps for Canada before moving to Belgium. Changed nationality and earned her first cap for the Belgian women at this EC. Asked about the difference between hockey in Canada and Belgium she said:

“In Canada the girls start playing a lot later. Mainly because of a lack of opportunity… The town that I played in only had… the only league that we had was like a mixed adult league. And in school you only start playing hockey as of high school…. and then you’re playing on grass as well. So technically we’re playing catch up…” Taco van den Honert, could also have been a feature among the coaches here. Since several years he’s been a member of the coaching staff for the Dutch national men’s team. But being such a legend from his own playing days he will alway be, first and foremost, a player. About the difference between his era (the ’80s and ’90s) and modern day hockey he said:

“Well, in today’s game the pace is much higher. Physical requirements are much higher. Back then there probably was some more space for individual players. There are still players like that, but I think the game has become much more more physical and high-paced. Today it’s more about the team and less about individual.” Jamie Dwyer, is the Australian legend, described by Taco van den Honert as an outstanding player who was able to make the transition from the previous era (more emphasis on individuals) to the modern era of hockey (more emphasis on the team). When asked about what is needed for the Australian team to beat the European nations in Tokyo or vice versa, he told us: Mats Grambusch is the captain of the Germans. Germany is and has always been one of the stronger club competitions in the world. But like many other European countries they’re having a hard time finding the right balance between the domestic club leagues and the demands of international hockey imposed by the FIH:

“It’s quite hard because you just don’t train as much as you used to. Because you play so many matches within a year, there is not much time to actually train. Because you have to recover all the time, because you don’t want to get injured. (I comment it’s similar to the NBA where it’s all about play, travel, play, travel…) Yes, but the good thing in the NBA system is they have a really long pre-season. So they can get fit in the pre-season. We don’t have a pre-season anymore. We just play and play and play! We don’t have one month a year which is a training month. There is no month of training anymore!” Kenny Bain is a Scottish striker who has played in the Netherlands for many years now and he takes on the choice for a central training system for Team GB as opposed to allowing the players to play the strongest club leagues around the world:

“You can start to see the flaws in the system they’ve been using. I always say playing abroad will help players and some have done that already, but there’s more players that could do that. I think they will have to encourage that for a couple of years. Because world hockey is world hockey and that’s why it’s at the level it is. (…) They have to get out of their bubble and expand their horizon. Let the players spread their wings…” Nike Lorenz plays her hockey in Germany. I asked her what it would take for her team to beat the almighty Dutch, before her very first final in a European Championship. With a lot of confidence she said: “With regards to Holland and Belgium it was really an eyeopener for me how open and active the exchange is between me (as a national team coach) and the club coaches and I really think that is a strength that we have in Germany, that’s unique to our system.” Shane McLeod is from and coached New Zealand. But he has spent a lot of his own hockey career, playing and coaching in Belgium before he took over the Belgian national men’s team before Rio2016. We spoke to him before the start of the EC:

“Germany is certainly a team that we’re very mindful of. They’ve got probably the most potential. I think they are a little untapped in some ways… if you look at what they could become. I think they’ve got an immense amount of star players in their side. Players that I would be very happy to work with, blessed with speed and skills…” Todd Williams is originally from Australia but is involved in English hockey as a coach (club & school) and a columnist for The Hockey Paper. Comparing school hockey versus club hockey in Australia and England and their added value for the game he said the following:

“Australia is the model you should be looking at, really combining school and club hockey. (…) The problem with hockey in English private schools is they compete with club hockey. They don’t fit together. (…) If I look at the best older players in my school team, they will not be able to play for the club team I coach because the fixtures will clash. It is dysfunctional and this is always the battle. The schools are very big powerful entities, not governed by the sports federation. (…) It was described to me once by someone from England Hockey, they very politely said: if it was a business, you would not set it up this way!” Adam Commens is the Australian high performance director for Belgian hockey and one of the important actors in the rise of Belgian hockey. He explained some of his ideas about values based coaching:

“Basically you want to get your teams to be able to live by culture, a certain way of living and thinking. And you try as a coach to allow your players to develop that. So you ask them what do you believe represent the values of this team. What are the kind of behaviours you would like this team to stand for. (…) So we have some values now we call TYPE: team, you, passion and excellence. (…) We speak a lot about the behaviours that underpin these values, the types of behaviours that enhance or the ones that derail our values. So when you’re coaching and have these values front of mind you can link these to the way you play hockey as well and you can always lean on those values. (…) It gives you a nice anchor as a coach, to lean on as a coach in times where the results might not go as you like. (…) Success is not always winning the match, success is showing that you’re representing these values on the pitch.”

Different kinds of administrators also made their way in front of our microphone. Marc Coudron, Marijke Fleuren, Bob Verbeeck, sports marketeer from Golazo and sponsor Tom van Kuyk from Rabobank shared their views. Marc Coudron is president of the Belgian hockey federation and one of the key players in the rise of Belgian hockey. One of his quotes that stuck with me was:

“We are too negative about ourselves. We are the only sport with a 50/50 gender balance. We are one of the only sports who are free of doping, free of betting scandals, nearly no scandals at all even… We have many qualities but we are always looking at other sports, saying they’re better than us. Maybe, but also maybe not…” Marijke Fleuren is not just the president of the European Hockey Federation, nor just a member of the executive board at the FIH. She’s is spearheading the #EquallyAmazing movement battling for equal opportunities for both genders on all fields of play. As a typical middle-aged, white man from a privileged environment, I get nervous when gender balance is forced upon us. How do we avoid appointing or promoting less capable women over more capable men, just to get to this balance. An argument I’m sure has been brought up many times before, so I asked her what was her response to this worry. Her answer was short and to the point 🙂

“I think the last 100 years we’ve had a lot of men on boards who were not the most capable, because it was not asked to us women… It’s not a measure of being more capable. We are different and together we are better.”